A 68 year old woman presented to my office for LVEF evaluation prior to cancer chemotherapy. Notably, the ejection fraction was normal, but the patient told me about pulmonary embolism she experienced during radiotheraphy following surgical excision of her lung cancer. The patient was on enoxaparin 4000 IU daily since 2013 and to date her clinical history was uneventful as to vascular events. Unfortunately, cancer was discovered in the contralateral lung.

The ACCP guidelines [1]state that LMWH (with full-dosage regimen) is preferred to other agents for extended ( > 3 mo to indefinte) treatment; nonetheless the authors underscore the lack of data when the guidelines were being prepared (Figure 1). ESC guidelines seem to be just a bit more restrictive with respect to rivaroxaban and cancer patients[2]
Prins et al [3]performed a pooled analysis of the EINSTEIN trials, demonstarting that rivaroxaban is effective as LMWH in the treatment of DVT in patients with cancer, as well as cutting down the risk of bleeding.
Please consider also the oral once-daily administration of rivaroxaban as an adjunctive positive feature of the drug itself in such patients. 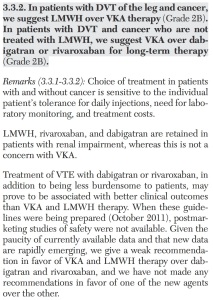 By Daniele Pontillo in Uncategorized on marzo 27, 2015.
← Number Needed to Treat (NNT) Calculator Is it only CAD? →